OCSA became a part of my life because Susan Roman was a part of my life.  We were friends for many years.  She and her husband, Rick, and my husband, Bob and I, lived across the hall from each other shortly after we were all married.  Our first children were born during that time we were in the apartment building together.  We were all very close.

Even though we all eventually moved out of our 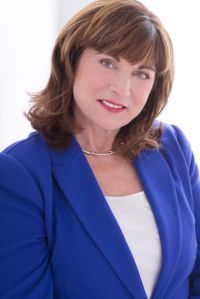 respective apartments and into new homes and on with our lives, we always made an effort to stay in touch.  If nothing else, I vowed never to miss their annual Christmas party; and trust me, the Romans knew how to throw a party!

Sadly, Susan was diagnosed with ovarian cancer in 2009, as her loving Mother had been many years ago. She and Rick, and their good friend, Vallie Szymanski, announced that they were going to start a Board at the annual Christmas party.  Susan had consulted with her oncologist for direction with this Board.  Dr. Schink’s recommendation was that they not raise money for research, but direct their fund-raising efforts and their commitment to getting out the message of the importance of early detection by being aware of the silent symptoms of this deadly disease.  Susan lost her mother to ovarian cancer and she knew she too was going to lose the battle but she wasn’t going down without a fight, and without working diligently to educate women and their families about the silent symptoms. Too many women learn of the cancer when it is basically too late to make a difference–as was the case with Susan. As board members committed to Susan and to her mission, we embraced her idea to make the term “ovarian cancer’ a household word.

I am a 24-year breast cancer survivor, and I am indebted to the women who went before me who lost their lives while research was being done that probably saved mine.  Those of us who have been diagnosed in the last 30 years now survive because of their sacrifices.   Men and women alike do not have any hesitation in talking about breast cancer today, as they did back in the days my parents were having children and the words “breast” or “cancer” or “breast cancer” were never spoken aloud!  Susan Roman and others like her have made it their quest to bring ovarian cancer to the forefront as others have been successful with breast cancer and not have it discussed only behind closed doors but openly so women can be more in tune with their body.

In fact, the Chicago Bears have worn pink in awareness of breast cancer.  Susan was a huge fan of the Bears; her dream was to see them wear teal in order to bring more awareness to ovarian cancer.  I hope we see her dream come true soon.

So, why did Susan ask me to get involved?  She wanted to take full advantage of my repertoire of family, friends, co-workers, professional colleagues, etc.  And she knew I would be pro-active and get things done.  Plus she knew I love being involved in “making things happen,” especially for such a good cause.  And most importantly, she gifted me with the opportunity to spend time with her, instead of only during the holidays, since we both knew that our precious time would be short lived.

My favorite memory since the inception of OCSA is from the First Annual “Gala for the Goose” event at The Signature Room at the 95th. My family and friends attended this event but women from my office attended too.  Notably, Maureen McIntyre (who recently lost her own battle with colon cancer) was present for this event.  It was the night she acquired her beloved Bella, a beautiful boxer puppy. She had lost her bid for the dog, but that did not stop our other co-worker, Mary Kay, from approaching the winner of the dog.  Mary Kay, who had been “stalking” the winner, learned that the winning bidder could not take Bella home.  Mary Kay immediately offered Bella a new home–and Maureen (“Moe Mac”) took Bella home as her very own. Bella was a terrific companion for Moe Mac, and Susan would be very happy to see the joy that Bella (formerly named Dora the Explorer by the breeder) brought to Moe’s life.  Susan loved her dogs and her dogs loved Susan. It was her dog Bacchus, who had tried to communicate to her for months that she was sick.

This year, I am looking forward to our first Annual OCSA Dog Walk on Chicago’s Northwest Side, and it will coincide with our 5th Annual OCSA Dog Walk in St. Charles.  The new Chicago event will take place at Bunker Hill Forest Preserve, and we are looking forward to a high turn-out and participation from our friends in Chicago.  We are up to the challenge of surpassing our suburban St. Charles event!

I am thrilled with our continuing relationship with the Penn Vet Working Dog Center at University of Pennsylvania.  OCSA established a scholarship for a summer intern that will allow a young veterinary student to have on-hands experience in the training started with our canine friend, Ohlin, the ovarian cancer sniffing dog.  We are about 3 to 5 years from having a blood test to screen for early detection of ovarian cancer, and our relationship with the Penn Vet Working Dog Center is instrumental in the pursuit of that research.

The 5 things I love about OCSA:

I would love to see more veterinary clinics involved in our Veterinary Outreach Program (VOP).  Veterinarians not only treat their animal patients; they develop close relationships with the owners of their patients and if informed about the silent symptoms of ovarian cancer, we believe the trust the owners have in their pets’ healers.  We encourage the veterinarians in our program to direct dog/cat owners to their own medical professionals for check-ups if they “hear” concerns expressed during the idle chatter that always takes place during routine pet exams.

I would like to see the expansion of OCSA, not just across Chicago and outlying areas, but nationally.  I’m excited about the involvement of our Girl Scouts and Boy Scouts in our annual dog walk fund-raisers, and the survivors who join our efforts. Rumor has it that an OCSA dog walk in England is being organized to take place the same day as ours – September 13th – as a result of an ovarian cancer survivor who reached out to OCSA.   I of course was hoping Ireland would be the first country outside of the states to jump on board our OCSA train, but I’ll happily take England if it means saving a life!  We are going international–one country at a time.